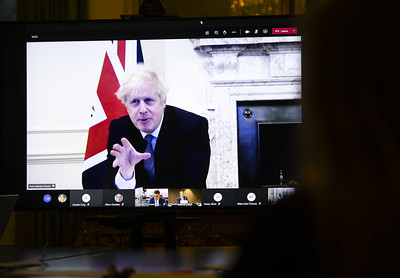 The plan includes the £1 billion new energy innovation fund which will help the UK stay ahead of the latest technologies needed to reach new energy targets, and “will help commercialise new low-carbon technologies like the world’s first liquid air battery being developed in Trafford,” stated the Prime Minister. Additionally, the plan brings £200 million of new funding to create carbon capture clusters and support storage technologies, an example of which is Highview Power’s CRYOBattery™ cryogenic energy storage technology, which uses liquid air as the storage medium.

“It has been an honour to be invited by the Prime Minister to his announcement of the Ten Point Plan for a Green Industrial Revolution, and to participate in the rich and varied roundtable discussion with him and some of the most relevant CEOs of the industries involved. I applaud the UK government for its commitment and technological ambition to make the UK’s net zero goals a reality,” commented Javier Cavada, CEO of Highview Power.

A key target of the plan is the creation of up to 250,000 British jobs, of which 50,000 will be in important industrial areas where Highview Power is developing plants based on its technology.

“Assets like Highview Power plants are vital to the transition to net zero, creating highly skilled jobs and enabling integration of renewables on a massive scale. These assets do require the grid to provide stability in their revenues, as it was provided years back to onshore wind and in the coming years is being provided to offshore wind. We are thrilled to make innovative Energy Storage a reality and be part of this Green Revolution,” added Cavada.

Highview Power’s proprietary cryogenic energy storage technology utilises air liquefaction, in which ambient air is cooled and turned to liquid at -196 °C (-320 ˚F). The liquid air is stored at low pressure and later heated and expanded to drive a turbine and generate power. It is the only long duration energy storage solution available today that is locatable and can offer multiple gigawatt-hours (weeks) of storage. The CRYOBattery™ has a small footprint and is scalable with no size limitations or geographic constraints, allowing for the deployment of massive amounts of renewables. Highview Power’s cryogenic energy storage plants offer valuable capabilities including voltage control, grid balancing and synchronous inertia, that give grid operators the flexibility to manage power and energy services independently.