How can the UK reduce reliance on gas?

Figures from the Office for National Statistics reveal the UK imported nearly £20 billion of gas in 2021, a 312% increase on 2020’s £4.8billion. This is unsustainable and every option needs be explored to reduce the amount of expensive gas imports that drive up consumer energy costs.
Fortunately, Great Britain has an abundant supply of wind and through the construction of onshore and offshore wind farms, has built a total capacity of over 27 GW (https://www.renewableuk.com/page/UKWEDhome), the UK’s largest source of renewable energy.

But wind farms only produce energy when the wind blows and this is not always when it’s needed. As a result, there are periods when wind farms produce too much energy or too little.

When too little wind is produced, fossil fuels such as gas are used to make up the difference. The UK paid £120 million to power the grid with gas at times when our wind turbines produced too little energy.

Highview Power long-duration energy storage technology reduces the need for gas by replacing it with liquid air energy instead.

The increasing number of renewable energy power sources such as wind and solar coming online present challenges of intermittency, geography, and stability.

Highview Power solves intermittency by capturing excess wind energy and storing it until periods when demand is higher than supply. The grid is then able to tap this renewable energy resource instead of gas to bridge the gap. Long-duration energy storage could reduce the UK’s reliance on gas by 10 megatonnes in 2035 – the equivalent of removing gas from 4 million homes.

We solve the problem of geography by strategically locating our renewable energy power stations to locations on the grid where long-duration energy storage is most needed.

Stability is solved because Highview Power technology involves a turbine that, like fossil fuels, keeps the grid stable.

When paired with renewable energy power supplies such as solar or wind, Highview Power captures excess energy that would normally go to waste and stores it until needed by the grid.

Reducing the need for expensive gas helps to “stabilise energy prices for the long term,” according to Highview Power CEO, Rupert Pearce, “By capturing and storing excess renewable energy, which is now our cheapest form of energy, we can keep energy costs from spiralling and power Britain’s homes with 24/7 renewable green energy, taking millions of tonnes of carbon out of the atmosphere. This will guarantee the UK’s investment in renewables and reduce our dependence on gas.” 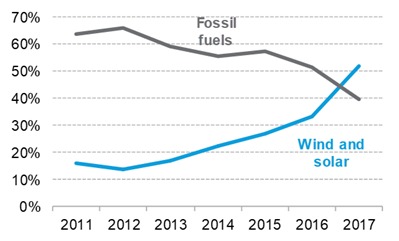 How does Highview Power Technology enhance the national grid?

Wind is the largest capacity of offshore wind and this continues to grow as new wind farms are brought online.

Despite this capacity, the energy supplied by wind isn’t always in line with demand. Sometimes it’s too much and sometimes not enough.

By strategically locating Highview Power renewable energy power stations along the grid, our technology can store excess renewable energy that would normally go to waste and then release it back to the grid when needed, reducing our reliance on fossil fuels.

Why do we need a resilient energy system?

We need a resilient energy system to ensure energy reliability for every home and business connected to the grid. A modern society and economy simply can’t function without this.

Because the grid was designed to support fossil fuels that produced consistent energy 24/7/365, renewable energy must be supported by long-duration energy storage which reduces the need for high-priced fossil fuels and keeps costs down for energy consumers.

“By capturing and storing excess renewable energy, which is now our cheapest form of energy, we can keep energy costs from spiralling and power Britain’s homes with 24/7 renewable green energy, taking millions of tonnes of carbon out of the atmosphere. This will guarantee the UK’s investment in renewables and reduce our dependence on gas.”

What are the 3 big challenges to achieving a net zero grid?

Power networks around the world are responsible for approximately 1/3 of global carbon generation and with the electrification of everything, this is growing every year, so it’s critical that the grid be decarbonised.

Solar and wind only produce energy during the day and when the wind is blowing. This is called intermittency. When the grid can’t rely on intermittent renewable energy it uses fossil fuels to meet demand.

Geography is another challenge because the grid was built around centralised fossil fuel power stations instead of solar fields and wind farms which tend to be located far away from population centres, in the case of wind, often offshore.

And finally, renewable energy is a poor source of grid stability because even when the wind is blowing and the sun is shining, energy isn’t produced at a constant rate.

Highview Power long-duration energy storage solves for all three of these challenges.

Highview Power also overcomes the challenge of geography because our renewable energy power stations are safe, modular, and locatable anywhere.

Finally, we also solve the problem of stability because our technology produces energy when liquified air is warmed. This spins a turbine, just as with a fossil-fuelled powered station.